Be Charge is Sustainability Sponsor of Piano City Milano, the first widespread festival of the city and among the largest music festivals in the world

Milan, June 15, 2021 – Be Charge  becomes Sustainability Sponsor of Piano City Milano, the largest Italian territorial music festival and one of the largest music festivals in the world, now in its tenth edition and scheduled in the Lombard capital from 25 to 27 June. Starting from shared values such as sustainability and innovation and the strong pioneering spirit that unites them, Be Charge and Piano City join forces to contribute to the rebirth and restart of the city. In line with the widespread Festival project of Piano City Milano, Be Charge is also the architect of a silent revolution that reverses the dynamics of mobility by bringing its charging services for electric vehicles in a widespread and widespread way throughout the Milanese territory, as in the rest of the Peninsula. A real peaceful invasion of public infrastructure that already counts 170 active charging points, another 10 in the activation phase and a further 200 already approved by the City of Milan. A widespread and widespread network that facilitates the transition to electric mobility making it easier, more fun and faster to refuel electrons thanks to new technologies.

Just as Piano City Milano meets its audience in squares, homes and unconventional spaces, Be Charge, aware of the value of the weather, invents new urban scenarios to meet electric car owners, committing to install 30,000 Quick Charge charging points of 22 kW and Hyper  Charge up to 300 kW DC by 2025. Even during the difficult  lockdown period, the work of expanding the charging network for electric vehicles continued unabated, which already has 4,500 Be Charge charging points active throughout Italy and as many in the activation phase. The concept of sustainability goes perfectly with the corporate philosophy of Be Charge which, at its own columns, exclusively provides electricity produced from renewable sources. The partnership with Piano City Milano as Sustainability Partner is to be understood as a contribution to raising public awareness of daily environmental protection practices.

“Milan is a very important city for us – commented Paolo Martini, CEO of Be Charge – because it represents the symbol of the culture of change. It is no coincidence that we have chosen Piano City Milano to give widespread visibility on the territory to our commitment to sustainability and towards the future of a city like Milan. Loving Milan means taking care of it and Be Charge as Piano City Milano, they want to contribute to a recovery made of sustainability and innovation». 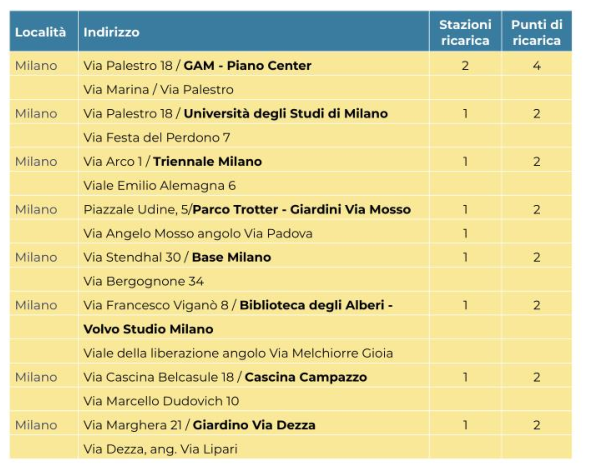